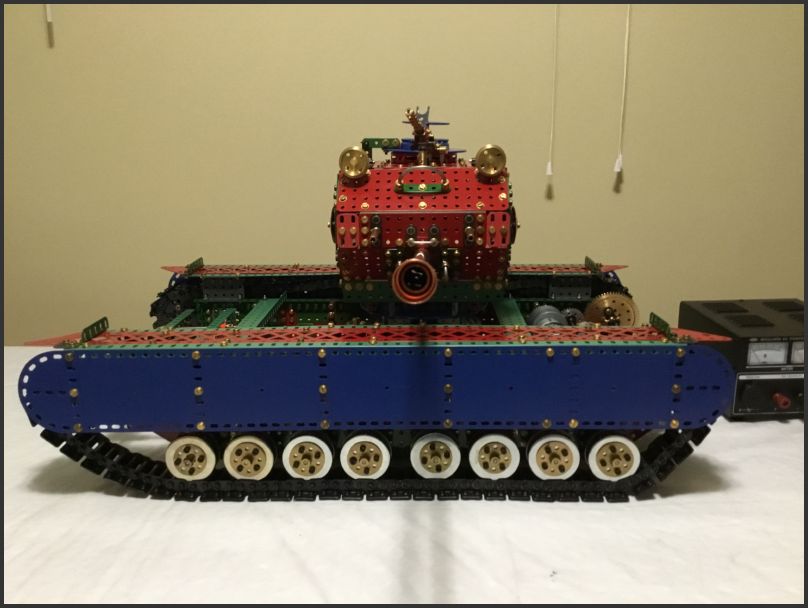 It is somewhat surprising to realize that, contrary to other subjects like cranes, clocks, commercial vehicles, fairground machinery, locomotives, orreries, etc., there are almost no Battle Tanks plans in the literature. However, we can very soon find in the history of Meccano some mention of them. In the MM November 1917 there is an illustration of a World War 1 battle tank, and in the same year an advert of 5″ X 7½” for Meccano and Erector sets saying to kids “Look Boys! – Isn’t great? You can build this battle tank with Meccano.” With a closer look, we can see that the crawlers on the illustration of the battle tank are Sprocket Chains. 10 years later, in June 1927 MM there is a picture of a tank, but with no crawler tracks? In November, the same year crawlers are represented by Sprockets Chains, even though this was suggested 10 years before? This way to represent crawler tracks seems to go on until 1937. In April issue of the same year, there is a French Renault tank with crawler tracks, each consisting of a length of Sprocket Chain to which a number of 2″ Strips are clamped by means of flat brackets and bolts; this was the first time in a MM that some information were given about its construction and motorization. In 1966 September MM issue there is a picture of a nice battle tank designed by G. Bennett but unfortunately no details of any kind.

In 1971, Meccano introduced a new accessory pack, the Caterpillar Track, named after as P91 Caterpillar Track Link. The 4-page leaflet showed 2 existing models, and how those tracks could improve them, but no words about battle tanks? Maybe Meccano didn’t realize at that time all the potential of this new pack? But it was a turning point. It meant new possibilities for builders. Between the 1972 and 1977 Meccano brought to market an Army MultiKit and Army Construction Set, and finally there are, in those sets some battle tank construction plans using those plastic crawlers. In MM January, July and October 1975 those Caterpillar Links were used on very nice tank, but again – except for January issue – no plans or details of any kind. Finally, in MM October 1978, 2″ Flat Girders were used as Caterpillar Links, and again only a picture – very frustrating indeed! For sure there is that battle tank plan in outfit 7/8 1954-1961. The crawlers are represented by flexible plates and the motion used four 2″ pulleys with their tires. Not impressive at all!

An Important Contribution to Crawlers Tracks

For each category the requirements are different: “High speed over rough terrain is the required performance for infantry carriers and light tanks. It is therefore necessary to fit highly flexible track with short length shoes or track elements”. My Abrams tank is classified as a heavy tank, and my model weight is over 40 pounds, so which kind of tracks would be the best for my model?

The nicest battle tank models I have seen on the Internet are those of John MacDonald. I am very impressed with the skill and talent he had as a builder of military vehicles, especially his Crusader, Sherman and Centurion battle tanks are amazing! Unfortunately, I could not find any building instructions or plans of those magnificent models, only few pictures. It looks like he had used bicycle roller chains and sprockets for the crawlers of his Sherman tank. Another prolific Meccano builder is Stefan Tokarski: it is worthwhile to take a look at his models gallery (see nzmeccano.com). Especially his illustrations of a variety of crawlers are very interesting for those who would like to build a bulldozer or crane with crawlers. He even used CCM bicycles Sprockets to motorize the crawlers tracks. It is important to mention his beautiful Renault and Goliath battle tanks. Hours of pure pleasure to look and study all those models. For an unknown reason, cans of Coke are in many pictures, they might be used as scales for the models?

Abrams are American tanks: they are classified as heavy tanks and are characterized by (a)their low profile, (b) 7 supporting wheels (c) important shielding of his turret (d) powerful cannon and (e) width compared to other tanks.

For those of you who are purist Meccano builders you should stop here to read my article because in my model I of a tank, I have used so many non-traditional Meccano parts.

When I decided to build my Abrams Tank, I wanted it to be about the same size as John Macdonald’s Sherman i.e. approximately 49 holes long. Because I knew that its weight would be important, I needed the strongest girders I had in my stock i.e. 49 and 37 holes Double L Section Girders (parts number Metallus 1027-49 and 1027-37). To joined those, flange turn inside, I used 7-hole Girders, 7 hole-L Section Girders* and 7 X 5 hole Flat Plates. Between the long Double L Section Girders, I put plates 3 holes plates of different lengths. The height of the chassis was then 9 holes.

Abrams tanks have 7 supporting wheels on each side, but mine has 8 for aesthetic reasons. Each is made with 2 Wheel Flanges, 4 Metallus Distance Sleeves part no. 4860-20, one Bush Wheel and, to increase rigidity, facing the chassis, a Metallus Long Boss Bush Wheel part no. 4018-39 and finally 4 M4 bolts 30 mm long. Acting as bearings, I used 3 plastic spacers part no. 260c bolted vertically inside of the chassis on the 37 hole Double L Section Girder. I have done the same thing for the supporting and the motorized Sprockets.

3- The Metallus Sprockets fixed on the top of the chassis can be divided into three categories, starting from the front end of the tank: the ones responsible of the tension on the crawler tracks, the supporting ones, and the one which are motorized. The first ones are the only ones that are not directly fixed to the chassis.

The Metallus Caterpillars are quite heavy, a strong device is needed to maintain tension. This was particularly the case with my tank, which had 60 links for each track. It with be too long here to describe in detail the device I used, I think that the pictures speaks by themselves. Suffice to say that I used 4 long compression springs that I bought at Reno Depot, 4 Metallus Large Axle Ball Bearings, Long Boss Bush Wheels, 23-hole Double L Section Girders and so on. It was important that the tension is kept even on both tracks, and alignment is critical. In fact, the tension on the tracks was so high with this device, that it was quite a challenge to install the tracks on the Sprockets. 4 strong hands would have been helpful for that job.

3b-The supporting Sprockets, five on each side, are directly fixed to the 49-hole Double L Section Girder.

My tank was quite heavy, so I knew I had to use motors with a very high torque. I had the chance to find nice cheap ones on the market. Those are geared 24 DC Volts with 40RPM. They are amazingly strong! With such high torque I had to use large tooth gears. I used a 90 tooth, 4 1/2″ diameter 20dp coupled to 40 tooth 2″ diameter 20dp gears, from Meccanoman parts no. 1124d and 1121d. Because I didn’t have enough room to put both motors side by side, I had to make some arrangements as can be seen on the pictures. I was finally ready for my first test on the crawlers’ tracks. I increased the voltage carefully, and slowly but surely my tank went forward. I was very happy, what a success! Then I changed the polarity to make my tank go backward. Even though the motors kept turning the gears were blocked. I stopped everything, tried again and my tank didn’t want to go backward.

After a close look I realized that crawler tracks are like ropes. You can pull on them, but not push on them. The pressure on the closest Supporting Wheel offered resistance to the crawler tracks, so that they bent, the motors in this position could not transfer any force so that the crawler tracks could not slide under the Supporting Wheels. It meant that my tank could not turn. I was very disappointed, but you cannot always succeed, I had my share of failure, but that never stopped me building and experiencing new things. I am sure that a solution for a tank of this weight would have been to motorize the front Sprockets Wheels as well: in this way, the crawler tracks would have been pulled in both directions. If I ever build another tank of that size, I would do some experimentation first.

In 2004, the SuperModel, No. 10900 “Cable Excavator” was sold by Märklin. Designed by Andreas Abel, and manufactured by Metallus, the model was not motorized. It contained new and special parts, one of which was the crawler tracks set. The set contains 10 Sprockets and 32 Links per track. It was designed for a chassis that was 25 holes long. Each crawler of my tank has 60 Links, i.e. almost twice the number of one set, so I needed 2 of them. We can see nice motorized models of Stefan Tokarski using those Metallus crawlers, one of which is that Märklin Super Excavator (see nzmeccano.com).

For some time, I had in my stock this nice 20dp 6″ Ball Thrust Bearing part no 168L. I thought it was the perfect occasion to use it for my tank’s turret rotating mechanism. To raise it from floor level, I used 4 Metallus 50mm Distance Sleeves part no. 4864-50. Incidentally, as for this model, I found in the past those Distance Sleeves very helpful. They come in different lengths, 20, 25, 30, 40 and 50mm. They are M4 threaded on each end and they have a hexagonal section, so you can use a hexagonal key to hold them in place when tightening their ends.

To motorize the bearing, I took a 20 teeth 1″ gear part no. 1101, a 57-tooth gear, a worm and a PDU. As could be seen on pictures, I again used those Distance Sleeves to raise and support the 20-tooth gear. I have done the same way again to fix the Metallus Circular Plate no. 4021-165. The grid formation of holes on that disc, compared to other discs with circular holes distribution, renders much easier any Meccano building on top of it. I think that those circular plates should have been brought to market in the early years of Meccano. They are so helpful, and come in 2 different diameters, 4½” and 6½”. This was a perfect building base for the tilting mechanism of the main cannon and the turret.

I had some Obtuse Angle Girders of different lengths, and I thought a tank offered a good opportunity to put them to good value. When you look at the shielding of a tank, especially its turret, you can see that there is a minimum of flat faces. This is quite challenging with Meccano parts! After a number of attempts, I arrived to the conclusion that I could not avoid flat surfaces for a number of reasons, the principal one was the size of the tilting mechanism of the main cannon.

For more information on this model, please contact me. 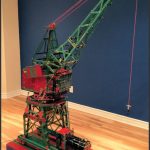