Models from BC – Fairground Ride & Helicopter 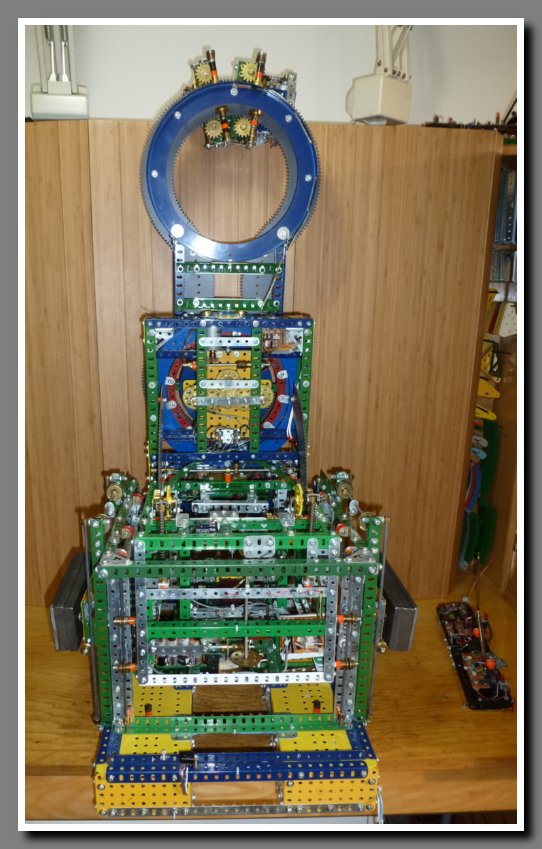 Not too sure what to call this but it could be called a Fairground Ride. The unit sits on a cube which has an elevator lift to raise the rotating track to clear the table. There is also a drive to raise the track into the vertical position, plus the track rotates. Sitting on the track is an articulated car which travels along the track in any position.

Why this model even came about is because when I ordered the large toothed quadrants I thought had to order 4 pieces to make up a set not knowing that it was posted as a set so I ended up with 16 segments. So then rather than send them back I thought of what I could build to use all of the segments, the model uses 12 segments make up the rotating track and 2 for changing the track from the horizontal to vertical position.

The fair ride is not based on a real ride, just something to build to use all of the large tooth quadrants. The remote controls for it were from two different remote control toys that I got from Value Village, and also from the Meccano tuner series kit cars. The Meccano kit cars are 27mHz and the other two were 49mHz. The receiving boards were taken out of them and wired to relays because the ride needed more power than they could handle, one was controlling relays for the 120-volt motors. Then took sending unit boards out of their cases and mounted them on a Meccano built plate.

An interesting story about the remote controls for the fair ride. One of the toys I took the remote out of was actually a small hovercraft that was made by Spin Master, which I bought before they took over Meccano (strange, huh?). Maybe I should get credit from Spin Master for integrating remote control in Meccano???

Also see these videos of the completed model: 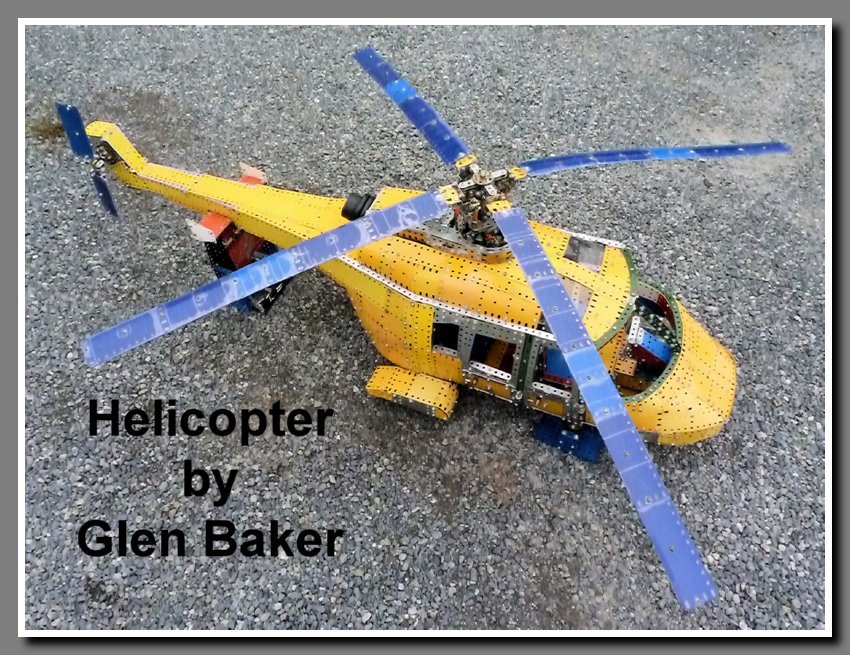 Here are some pictures of the helicopter. It weighed 40 pounds, the motor was a 120-volt from a hand held vacuum. The bearing for the swashplate was from the vacuum advance of a Nissan Micra distributor. The foot pedals controlled the pitch of the tail rotor by a plastic coated stainless steel cable. The landing gear is run by two 3-6 volt Meccano motors, one for the front and one for the two rear wheels. The collector arm controlled the simultaneous pitching of the main blades via a gear box motor from a tuner remote controlled car, which raised or lowered the shaft and transmission for the main blades. The joy stick via gears and levers controlled blades for front, rear, and side to side pitch. All motors were powered from transformers which were hidden in front to achieve proper balance front to rear and side to side, it took quite a bit of time and rebuilding to make sure it was balanced when lifted by the main rotor shaft.

The unit actually did get off the ground for a bit, but all the body work had to be removed to cut down the weight.

Also see these videos of the completed model:

This article appeared in the September 2016 issue of “Canadian MeccaNotes”. 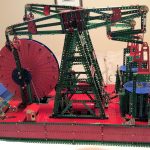 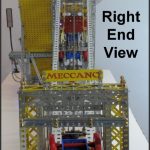