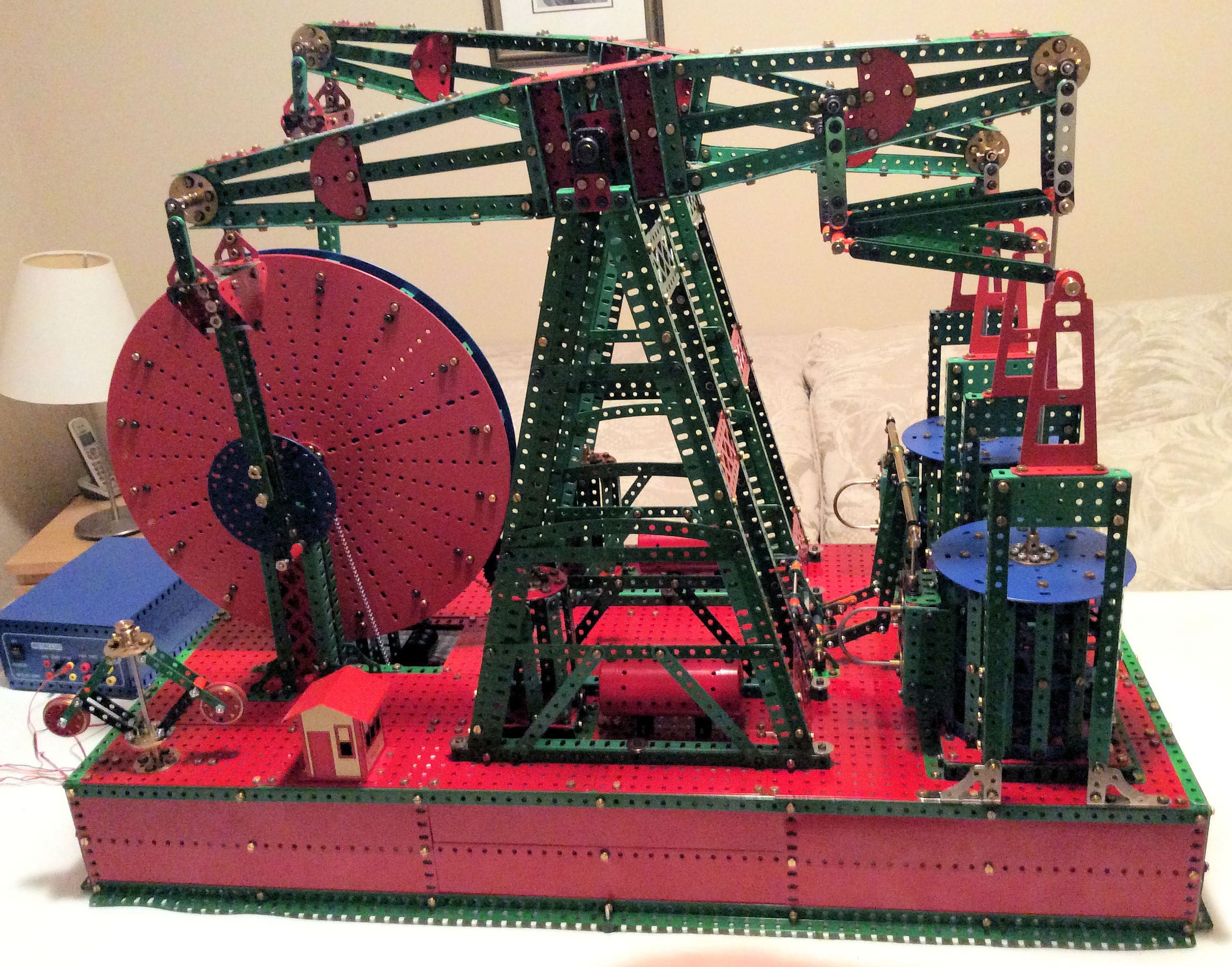 Scroll down for a video of the engine, below the text.

This model is a kind of amalgam of the:

A-Frame Beam Engine-by Philip Webb MP-93-1996 and the Twin Beam Pumping Engine by Mike Cotterill CSM-14, and some of my own ideas.
For this project I wanted:

1. An impressive flywheel that would act as a real flywheel and that would stand out of the base;

2. Considering the size of the flywheel I intended to use, I had to oversize the: A-Frames, main beams, cylinders, steam chests, etc. that appeared in MP-93 or CSM-14;

3. To put in evidence “Shafting Standard” large and small part no. 177 and 178, that from my point of view look very nice and appeared rarely in Meccano literature;

4. Exploit the potential of the large axle parts developed by Ashok and Metallus, without constraint use Meccano, Metallus, Erector or Marklin parts that I had;

5. The model to run smoothly and silently.

B – The Flywheel Bearings

The axle supporting the Flywheel is held in place with one Metallus Collar on each side part no. 5013-07 and two Brass Washers part no. 257 (four in total). Those later fit perfectly into the cavity of the Metallus Ball Bearing. That is why two have to be put on each side. Instead of Metallus Collars parts no. 254 or 254a could have been used.

A 4½” diameter Metallus disc part no. 4020-114 is fixed by a Bush Wheel part no. 253 to each end of the axle supporting the Flywheel. A Crank part no. 26 is bolted at the periphery of each disc 180 degrees out of phase, for a 4½” stroke. The Connecting Arms Pictures speaks for themselves. Altogether they are 25-holes long and are made with: three Cranks, four Trunnions, five plastic spacers part no. 260c, three plastic washers part no. 38b, one Metallus Spacer parts no. 4865-50 and 4865-25, two 6-hole Angle Girders and one 6-hole strip, eight 4-hole strips, six 15-hole strips, seven 7-hole strips, six short axles, two Triangular Plates no. 226 and eleven collars.

The dimensions of the Main Beams are: 51-holes long, 7-holes at the center 3 at the ends and 3-holes wide. To facilitate their fixing at the ends of the arms such that they have no bumps on their back I used Metallus Bush Wheels part no. 4017-39 to support the Connecting Arms and the long boss Bush Wheels no. 4018-39 at the other ends.

For appearance and rigidity Semi-circular Plates no. 214 were used on each arms of the Beam. To facilitate adjustment End Slotted Strips were used for the central step of the arms (the one going from the Bush Wheel to the square plates at the center of the Beam).

The verticality of the axle going in the core of the Cylinders is assured by a parallelogram that changes form when the Main Beam goes up or down. For that to be possible, each segment of it must be free to move independently and reduce friction to a minimum. Cranks and again Plastic Spacers part no. 260c, 7-hole and 11-hole strips, plastic washers part no. 38a were used to build that parallelogram. A Handrail Coupling free on the axle is holding the Pump axle.

To fix to the base or the A-Frame, the end of the segment is parallel to the lower segment of the parallelogram, I did not want to use horizontal Angle Girders or other device that would hide the motion of that parallelogram when the Main Beam was going up or down. That is why I opted for Large Shafting Standard part no. 177. To fix those Large Shafting Standard, 7-hole Metallus Double L-Section Angle Girder part no. 1027-02 were used, and 21-hole Angle Girders were bolted to them and to the base by Flange Brackets parts no. 139 and 139a.

Their form and construction are inspired by MP-93. Each leg consists of: a 37-hole Angle Girder, a 37-hole Flat Girder and a 37-hole Strip. The Flat Girder is sandwiched by the other two, overlapping them at the bottom by one slotted-hole innermost. Those slotted-holes are sandwiched to the ends of a 25-hole Metallus U Girder part no. 1022-25 and a 25-hole Strip. The legs are joined at their top by 4-hole Angle Girders on which is bolted the brackets of the Metallus Ball Bearing. The A-Frames are joined together by 9-hole Braced Girders part no. 100a. Finally the U-Girders are bolted with long bolts and Washers part no. 38d.

Their core is made with three Hub Discs part no. 118. To the top one is bolted a Circular Plate no. 146 with a long boss Metallus Bush Wheel part no. 4018-39 (the long boss of this bush wheel is a good guide for the Pump axle). The three Hub Discs are joined by sixteen 11-hole strips and the one at the bottom is bolted to a 11×11-hole Flat Plate part no. 70b. This later is fixed to the base via two 11-hole Z-Girders made with two 11-hole Angle Girders. Two other 11-hole Angle Girders were used to completely cover the-hole under the plate.

I – The Valve Chest

To a 5×7-hole flanged plate part no. 53 is attached at the top a 5-hole Flat Girder with a Double Arm Crank at its centre part no. 62b through which an Axle Rod will go up and down.

On each side of the Flanged Plate is bolted one 7-hole Angle Girder and two 7-hole Flat Girders bolted together by their slotted-holes.

Two Bush Wheels are bolted to the Flanged Plate so that their bosses are 5-holes apart and those are joined to a Hand Rail Connector U-shape part no. 1218.

The valve is attached to the Cylinder by an Angle Bracket at its top and bottom.

Two Small Shafting Standard part no. 178 hold an axle in which is journalled a Sprocket Wheel part no. 95b and a Triple Eccentric part no. 130. To this later is bolted an arm assembled from: a 6-hole strip, a Strip Coupling part no. 63b, a Metallus 9-hole DAS 2x9x2 part no. 1014-29. To the centre of this latter is fixed a Metallus Double Arm Crank part no. 4680-05. On each fork of the DAS is fixed, with two bolts on each side, a three-hole plastic spacer part no. 260c and an Axle Rod journalled through the free-holes of the plastic spacers.

Note: The opening and closing of the Valve Chest is assured by a see-saw action that is activated by the Triple Eccentric arm pushing and pulling the Axle Rod journalled in the plastic spacers.

The see-saw – The slot of two Slotted Strips part no. 55 are journaled through the axle, being fixed by the plastic spacers. Each Slotted Strip is bolted to a Bell Crank part no. 128, and to their other arm is sandwich a three-hole plastic spacer with a 5-hole strip. An axle is journaled through the boss of the Bell Cranks and the top-hole of a Trunnion on each end and this later is bolted to the base floor. Plastic washers were used to put apart the Bell Cranks that are free on the axle.

To the free end of the 5-hole strips is locknutted a Collar and an 11-hole strip, and a Crank is bolted to the end of those latter parts. A long axle is passed through the boss of the Crank, and two Handrail Couplings are journalled through it. Those Couplings hold the Axle going up and down in the Double Arm Crank of the Valve Chests. To strengthen the long axle supporting the Handrail Couplings I used Metallus brass Hollow Shafts.

They are constituted of two arms made by 9 and 5-hole narrow strips each supporting 10 Wheel Discs part no. 24a or 24c, for a total of 40 Wheel Discs for the two Governors. The ends of the narrow strips are fixed with a Long Pivot Bolt part no. 147h to a Double Bracket bolted to Bush Wheels. An Axle passes through the bosses of the latter and this one is journalled through the long boss of a Metallus Bush Wheel bolted to the floor of the base. To the top of the Governor’s axle, for appearance, a Pulley part no. 23 was fixed. The lower Bush Wheel must be free so that the governors spin out with increasing speed.

The floor of the base is a combination of Flat Plates without overlaps, and there is a-hole in it, for the passage of the Sprocket Chain driving the Flywheel.

I knew that during the construction of the model, I had to move the base. For this reason, I bolted about eighteen Metallus rubber dampers part no. 4900-10. Those have given me a good grip to move or lift the base: in addition, they mechanically isolate the base from the table supporting it. A good way to eliminate vibrations and noise.

The Governors are directly driven by one motor each and the Flywheel was driven by a Gear Motor 0-24 VDC 6.8 to 14.6 RPM bought at Addisson Electronics for $13. An Adaptor Coupling part no. 255 had to be put on its shaft.

It’s worthwhile to mention that this model runs smoothly and silently, especially because of the Ball Bearings used to hold the big axles. The only noise made is when the axle driving the see-saw of the Crank Shaft Unit (see section J) drops down into the slot of the Slotted Strips in the forward motion of the Triple Eccentric.

It will be very distressing to dismantle this model, but I need the space and the parts to build new ones!

This article appeared in the March 2016 issue of “Canadian MeccaNotes”. 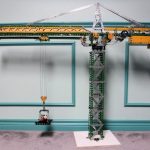 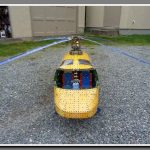