Note: this article originally appeared on the SCMEC website (now shut down)
and is reprinted with the kind permission of Phil Edwards, their former webmaster. 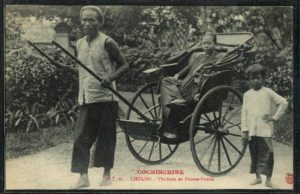 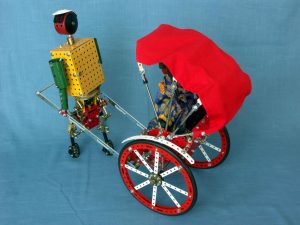 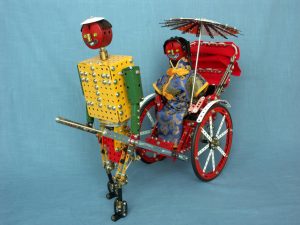 General views, with the sun parasol up, or with the hood up. 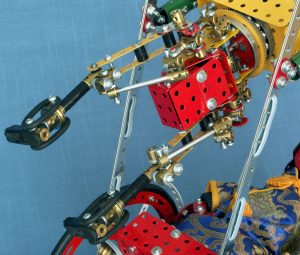 The walking motion, shown at the four major angles of the drive cam.
Also, the turntable that connects the upper and lower torsos can be seen. 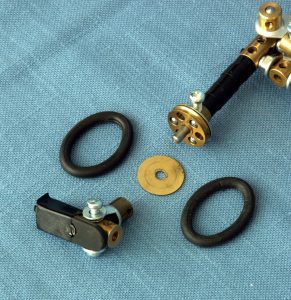 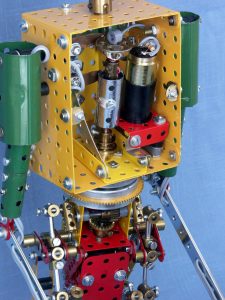 The ankle and the inside of the man’s upper torso, showing the steering drive motor and dual slip rings, for getting power down to the leg drive motor in the lower torso. 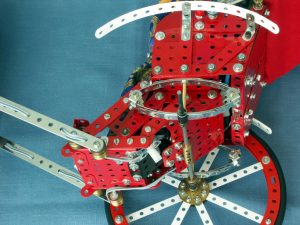 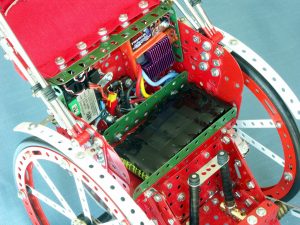 The carriage and the radio control/motor drive electronics and most of the batteries.

This model was conceived after seeing a video on the Internet of a life size mechanical walking man pulling a chariot.

I used a linkage CAD program called Roberts Animator to design the linkage for a leg. Click here for a screen capture of leg as it goes through it’s walking cycle.

See below to see the model walking around our kitchen (in high resolution). There’s sound, so turn your speakers on!  Thanks to my friend Tony Sorce, for lending me the camera and putting the movie together.

The model is driven by a pair of MW Models 12V geared motors, one for operating the legs and the other for controlling the rotation of the lower torso, and hence the direction of which the model walks. The model is powered from 10 ‘A’ sized NiCAD rechargeable batteries in and beneath the Rickshaw’s seat. The radio control system seen in these photos has recently been replaced with a microprocessor based ‘Bluetooth’ microwave link, to get around radio interference problems at the Toronto Hobby Show. 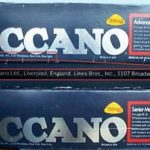 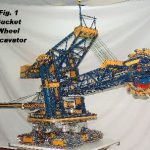